PICK ME UP, BABY 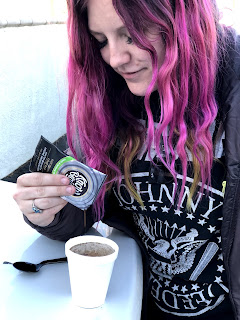 For a limited time, Know Brainer and I have partnered to give you 15% off your entire order – use code KBCC at checkout from now until 6/4/18.

Our first night out on the road was a short one, but the morning was divine. If you didn’t catch my story about Dead Horse Point and the start of our PNWhat?! trip, check it out.
Before we jetted out of Utah and onto the salt flats, we spent the morning re-situating our gear in the morning glow while I boiled some water in the JetBoil. The thing about being in the middle of the desert is that there is no coffee, there’s definitely no dirty chai. 😭 Cue why I was so excited to work with Know Brainer on this trip. Their instant mixes and creamers are not only delicious but also totally helpful. Since December ’17, I’ve been casually working on a keto diet. If you know anything about me, you know that I spent a good chunk of my early 20’s breaking my back in the gym and living off nothing but grilled chicken and steamed broccoli. It was miserable. But I was skinny! Safe to say, life caught up with me and my unrealistic lifestyle did too. I had lost 75lbs by 22 but started to gain it all back once I stopped spending 2+ hours in the gym every day. In December, I decided I needed to work on my health again and a keto diet seemed to be the answer. I dropped 2 pant sizes in a month! Since then, I’ve been keto recipe crazy – making Know Brainer an enticing concept. 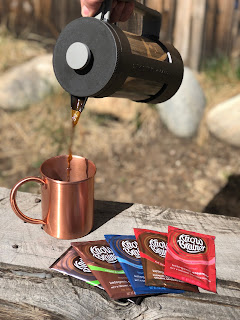 Know Brainer combines organic grass-fed clarified butter with nonGMO MCT oil to create a sachet for on-the-go fuel you can add to coffee or hot water! I thrive on things like this because of its ease, all you do is knead the packet with your hand and then pour into your coffee – voila, be ready to burn fat and refuel your morning. For us, this meant making a quick cup of coffee for both of us on the trunk of my car before making the 6-hour drive to the salt flats. We made our mix, took some sips – ahhh! So refreshing.

We’d start heading north for what felt like forever, hitting Salt Lake City around 12:30. Not so surprisingly, we both still felt full and energized from our morning coffee. Drew went for a run while I hopped on an interview, utilizing the city’s reception before we would head on to my bucket list item: the Bonneville Salt Flats. 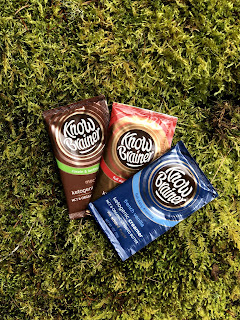 I don’t know why, but something about that wide open, stark landscape has been stuck in my head since I was a child. I’ve been to Utah several times, but never the flats – I was stoked. Except, in typical trip fashion when we got there it had been raining quite a bit, making it very unsafe to drive on the flats. There are lots of spots you can safely pull off and go explore by foot, but the DREAM was to drive my BMW all over that flat, dang it. We pulled off at some art piece first, just to get a taste and see what the flats were all about. The wet, muddy salt on my feet felt refreshing and made me feel whole. There’s nothing like checking off a bucket list item, even if it wasn’t what I had imagined.

I was excited to get in the car and keep moving, our goal was to make it to Water Canyon in Winnemucca to camp. Not even 30 minutes further up the road, we saw the real pull off for the Bonneville Salt Flats – and it was dry. We decided to risk it and slowly drove out onto the flats after watching a Subaru do the same (thanks for taking the leap, guys!). We didn’t break any speed records, but we did have a great time out there. After acting like kids for a bit, we hopped back in the car and headed on to Water Canyon. 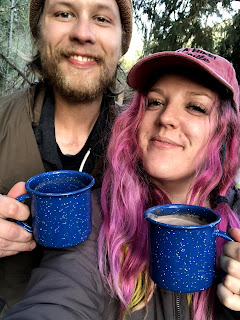 Our short 4-hour drive to the spot would turn into a game of “do we” or “do we not?” A storm was brewing, like, really brewing above us and over the mountain range we were headed to. I downloaded a radar app and it wasn’t looking good for us. Drew wanted to camp, I was feeling that another night in the car would be garbage. We started driving to the spot then gave up when it began pouring. At that point, we turned around and headed back into Winnemucca to a motel. We’d crash for the night so we could make the long, long drive all the way to Umpqua Hot Springs.

The motel was great, it was nice to not be cramped in a car. The breakfast was mostly muffins, so we found this to be another perfect opportunity to try out Know Brainer’s instant chai. I checked us out while Drew lit up the JetBoil. It’s incredible how easy it is for us to use these packets while on the go. With our JetBoil in tow, having hot water wherever we needed it (or coffee) was not a problem – Know Brainer just made it way better! We grabbed our chai’s, packed up the car and were on our way to Oregon.

For a limited time, me and Know Brainer have partnered to give you 15% off your entire order – use code KBCC at checkout from now until 6/4/18.