After visiting Moab in January of 2017, I’ve been dreaming about making it all the way west and visiting Zion National Park. The incredible weeping canyons and red dirt were calling my name from miles away. Mildly depressed around the holidays, I did what I always do, called Kimberly Crist to see where she would be spending Thanksgiving. While most were planning their holiday trips back home, we started planning our western Utah adventure.
With other friends in tow, we would set out on Thursday evening to arrive at our Hipcamp location just south of Zion in Hilldale, UT. To say it wasn’t an incredibly surreal experience pulling into the small town would be a downright lie. It’s a very unique community surrounded by tall walls of red rock, no paved roads. We continued on for a while then began driving upwards to Zion Glamping Adventures. Now, glamping is not normally the way we roll but Kim and Keith were checking out the spot as part of a Hipcamp field scout gig. I couldn’t say I wasn’t incredibly excited when I saw our digs for the evening. A beautiful white tent with two queen beds and a heater – sounds like a damn dream. We unloaded the cars and set up the rest of camp. Caught a badass sunset. Made some yummy camp dinner. Set our cameras up for star photos.
I had never attempted any night time photography before and I was hella excited to learn from a peer. Kimberly helped me set everything up (thank you!) and we waited for the sun to fully set before we got started. The light shining through ours and other’s tents, plus the surrounding campfires, made for an array of opportunity to catch some light and stars. I opened my shutter; click. My first photo was surprisingly good!! Beginner’s luck. 😉 Took a few more and was beaming as we went to bed.
The next day we would pack up and make our way to Zion National Park which was flooded with fall-time tourists. We only had one main item on the agenda – hiking The Narrows. This special winding trail takes you past weeping rocks, hanging gardens and vicious swells of water. We rented our gear (well, what they had left – meaning no wetsuits) and headed for the trail. It. Was. COLD. But the kind of cold that gets your heart rate pumping and just propels you forward. The towering walls around us making me feel like we were being transported. It’s incredible how something like this could not only exist so close to home (if you can call 9 hours close) and be so accessible. We hiked for a couple of hours, being conscious of the setting sun.
Our goal was to make it about halfway in, but we underestimated the strength of the current and we were fighting to make any progress we could. At one point, part of our party turned around, unable to withstand the cold water any longer. I, honestly, felt fine. haha! Kimberly, Keith and I continued on for about 20 more minutes before I suddenly slipped on a rock and went down. I have never felt the breath in me disappear so quickly, it was an incredible shock. My immediate reaction – SAVE THE CAMERA. So precariously draped around my neck, it nearly went for a swim, too. At this point, I was soaked from the breast down. I was eager to continue on, but my friends decided it was time to return. We headed back, made it to camp and had another peaceful night.
The drive back was just as gorgeous and I’ve honestly never laughed so much with Juan and Eduardo. They make for AMAZING road trip buddies. I hope to return to Zion, maybe for longer than a night. I’d do anything to make it out to Angel’s Landing. We attempted it in the morning, but with 20mph gusts decided we wanted to live. Instead, we hiked another trail above Weeping Rock to catch sunrise and God, was it beautiful. 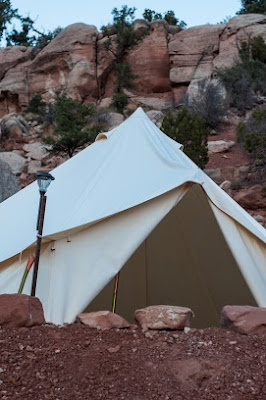